Quotebook 3: The Reviews Are In

Earlier this week, we released the third major version of Quotebook. Here’s what the press had to say: 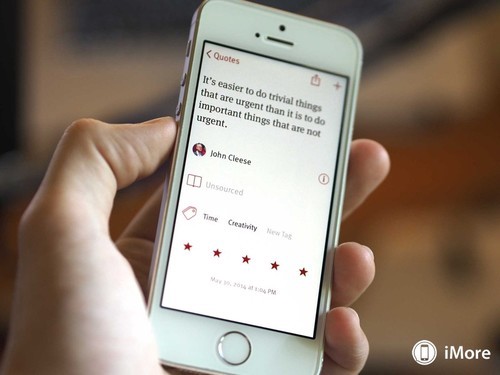 We all have our favorite quotes, and the newly overhauled Quotebook app aims to help us store and organize them all. The app, with the kind of clean design we expect from Lickability, makes it easy to keep all of your favorite quotes in one place, with ratings, sources, tagging, and more.

Quotebook, developed by the folks at Lickability, has long been my favorite app to save and archive quotes and passages on the iPhone and iPad.

Hopefully, this will help you see why I love the app so much and it has been on my home screen since the day it was released. The new version is certainly worth your time checking out.

I can’t believe the update is free because of how much has been added, let alone the brand new interface and the fact that it is universal. Quotebook is available on the App Store for $4.99 and is a free update for existing owners.

With today’s update, this universal app is better than ever. You can now add images and descriptions to your authors and sources, import quotes from Tumblr and Facebook, and share your quotes to apps like Tweetbot and Day One.

Quotebook 3 by the handsome young men at Likability is not messy or boring. Some of the best apps on iOS are ones that do very specific things. Quotebook is in that class.

Developers say many things in press releases, however on this point from Lickability I most certainly concur:

Lickability has been and will always be concerned with all the small details that make apps great.

Quotebook is simply a delightful app that I have used for years to collect bits of wisdom from notable people, friends, and even my son. It’s not only perfect for quickly recording a great quote, but it makes returning to those quotes and reflecting on them frictionless.